A Culture of Golden Calves 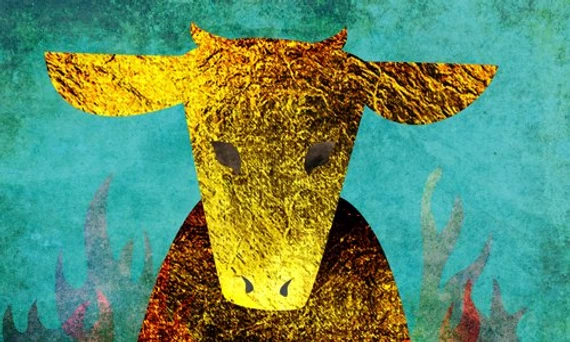 “They have quickly turned aside from the way which I commanded them.” Exodus 32:8a

God has saved Israel from the wicked and destructive hands of Egypt through many miracles. Led by the Lord with Moses as their deliverer, they are in the wilderness, and now at Mount Sinai. In Exodus Chapter 32 we read the scripture that details of how Moses is at the top of Mount Sinai and the people of Israel become impatient with the absence of their deliverer. Initially God speaks to Moses while Aaron, the elders, and Israel remain at a distance. As the Lord speaks His commands, it would only be Moses on the mountain to talk to God alone. While Moses is gone, the people continue to lose their patience and their ability to believe by faith alone. The people of Israel go to Aaron and makes their demands that he make them a god(s) that they can see and recognize as the one who is going to lead them into the Promised Land. “Now when the people saw that Moses delayed to come down from the mountain, the people assembled about Aaron and said to him, “Come, make us a god who will go before us; as for this Moses, the man who brought us up from the land of Egypt, we do not know what has become of him.”” Exodus 32:1

Here is why things begin to get so interesting. When the people of Israel use the specific word for “god” is Elohim. Although many will quickly recall that this Hebrew word means The True God, It is important to know that Elohim can also refer to pagan gods. When Elohim is used as a plural word, it is specifically referring to pagan gods. When it is used in a singular context, it is defining the True God. Because of this, if we were stop right here with just “god” alone, we can easily find ourselves not knowing who Israel is talking about. Therefore believing that they are referring to pagan gods, because of the lower case “g” in our English translations. When we look at this directly as pagan gods, we don’t question what is happening. We look at this as a false god and the error is in idolatry alone.

Ultimately Aaron succumbs to their demands, and creates a golden statue of a calf, in which they declare, “This is your god, O Israel, who brought you up from the land of Egypt.” (Ex. 32:4b). At this point in the scriptures, we still don’t know which God/god (Elohim) they’re talking about. However, Aaron makes it clear when he says, “Tomorrow shall be a feast to the Lord.” (Ex. 32:5b). When Aaron uses the word, “Lord,” Aaron is specifically using the name, “Yahweh,”. Yahweh is the Hebrew word for the name that God used to identify Himself to Moses as I AM (Exodus 3:14). Yahweh means The Lord, Jehovah. Though the Israelites used the Elohim (plural) defining the request of a golden calf as a pagan god, Aaron immediately redfines the golden calf as The Lord, Jehovah. Now we know who they are talking about. This golden calf is now officially being declared as Yahweh, The Lord our God, as the feast is declared fo Yahweh. Yahweh saved us from Egypt. Yahweh is our Lord. Now at the very moment that Moses is with the Lord on top of Mount Sinai, they are forming an image to worship and redefine as The Lord their God.

How is this even possible? Keep in mind that this is a generation of individuals who have been in slavery for hundreds of years in Egypt. Egypt was a nation who defined multiple gods to the tolerance and acceptance in which they needed to fit their culture. From birds with human bodies, to insects, to different created beings, moon gods, sun gods, star gods, fertility gods, and much more. Egypt was a nation of many false gods. An idolatrous Nation who constantly created images for the people to recognize, acknowledge, and worship as they were able to see for themselves. When the leadership of Egypt needed to implement a certain acceptance and/or restriction within their reign as Pharaoh, they created and established a false god to back up their need. From the identity to the creation of an actual idol (statue) this god would be revealed as a fresh and/or new revelation to the people. The Egyptians would serve the images with offerings and worship. Often living in celebration and with fear, they dedicated their lives to these false gods. We have to remember that many generations of captivity of Israel it naturally forces them to become subject to these images. The culture, by secondary nature of being within Egypt, though not a part of actual Egyptian culture impacts Israel and their future. Though Israel was never active in their worship to these false gods and their images, they had become accustomed to the concept of seeing, believing, and adapting into cultural relevance.

We read this passage of scripture, and cannot comprehend how the children of Israel came so far and yet so easily caved into the culture of Egypt, trying to morph Egypt into their definition of Yahweh. I say this, and yet here is our current reality…there are many Christians doing this very thing every day. They will declare, “Jesus is Lord,” but they don’t actually follow Jesus. Just as Israel said they worshiped Yahweh, they followed their own desires instead of God’s declared will. Instead of adhering to the written word of God, we have taken the liberty to redefine who God is to us according to our willingness to be obedient by our own standards. Today, when we don’t like what we read in His word, we quickly redefine who God is, and why those particular scripture no longer mean what they once did. We have quickly became a culture who create golden calves for cultural relevance so that we can make God fit into our concept of acceptance and tolerance. Many Christians are picking and choosing which passages of Scripture they want to follow—and then ignore the rest that challenge them and the current movement of our day! Sadly, we have Christians who go on and on with verse after verse that talks about God’s love, while those who trumpet the love of God somehow ignore His call unto holiness.

And should I dare to mention the call for believers to repent and turn from the ways of the world in our modern “woke” culture? People today just need our leaders to be like Aaron instead of Moses. The current culture want someone who they can tell what to do, how to do it, and then declare that somehow this is for the Lord. Before us today is a generation who proclaim His mercy but turn a blind eye and a deaf ear to His justice. Everyone must learn that they can have their own opinion, but that does not mean that they are entitled to have their own version of truth. In nations across the earth, but especially in Western Christianity we are creating a God formed in our own image rather than worship the God who created us in His image. We have to get to the understanding that when God created us in His image it was done so that we are transformed from the inside out. When the power of transformation is removed, we are void of any power. The greatest blessing God gave mankind was to make him into His image and likeness. The greatest insult that mankind gives to God is to make Him into the image and likeness of man.

Sure, we may not be bowing to a statue of a golden calf, but it is a false god nonetheless. The current culture has managed to create a knockoff Jesus, which is nothing short of an idol. It is not worshiping Jesus in truth. Listen, if we are to be followers of Christ we are to also worship Him in truth. Which means that we must take Him at His Word—all of it. I hate to ruin the day of sloppy agape and greasy grace, but if you’ve been worshipping a concept of Jesus that sounds more like the current status quo of our culture than the God of Abraham, Isaac, and Jacob. I’d encourage you to get back to into the Word of God as quickly as you can.

An idol can be anything that a person values, loves, and desires more than God. An idol could be a girlfriend/boyfriend, a spouse, a business, a relationship. etc.. Truth is, an idol could be a hobby or a sports team that you follow. And whether you want to recognize it, your own appearance (fashion/style) can easily become an idol. It could be anything. If we continue to permit this generation to redefine who God is because they see God as boring or legalistic, we will end up putting other things in His place that really satisfy us more than it does the Lord. We are offending the Lord in our complacency and destroying ourselves at the same time. Ironically, those two things (idolatry and apathy) makes God angry. In order for us to be a generation of believers who refuse to succumb to the deception, we have to embrace the Word of God in its fullness. You cannot afford to ignore the parts that you may find challenging, or uncomfortable. You cannot afford to ignore the parts you may not currently understand. A god that you fully understand, will always be smaller than you. The God of the Bible is far bigger than you and I.

2 Corinthians 11:2-4 —“You need to know that God’s passion is burning inside me for you, because, like a loving father, I have pledged your hand in marriage to Christ, your true bridegroom. I’ve also promised that I would present his fiancée to him as a pure virgin bride. But now I’m afraid that just as Eve was deceived by the serpent’s clever lies, your thoughts may be corrupted and you may lose your single-hearted devotion and pure love for Christ. For you seem to gladly tolerate anyone who comes to you preaching a pseudo-Jesus, not the Jesus we have preached. You have accepted a spirit and gospel that is false, rather than the Spirit and gospel you once embraced. How tolerant you have become of these imposters!”

We must see this warning, because if they could have all the right declarations while still worshiping an idol, you can too. I implore you (the reader) to adhere to this word, and destroy the golden calves in your life. The Lord will continue to anoint the pure in heart, not the calves of tolerance.