Get off the Porch 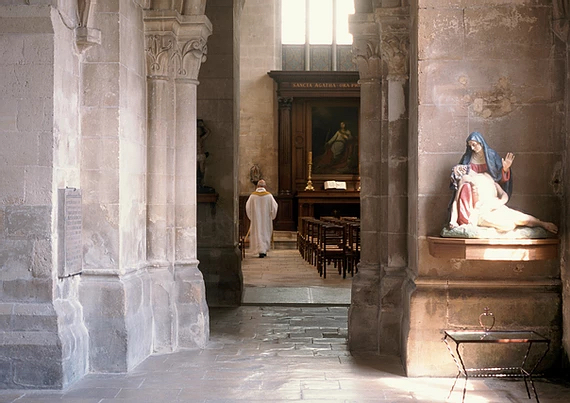 “Blow a trumpet in Zion, Consecrate a fast, proclaim a solemn assembly, Gather the people, sanctify the congregation, Assemble the elders, Gather the children and the nursing infants. Let the bridegroom come out of his room And the bride out of her bridal chamber. Let the priests, the Lord’s ministers, Weep between the porch and the altar, And let them say, ‘Spare Your people, O Lord, And do not make Your inheritance a reproach, A byword among the nations. Why should they among the peoples say, ‘Where is their God?’” – Joel 2:15-17

These verses found in the book of Joel are often quoted in songs, books, and messages, but have we failed to apply them within our daily intercession? I found myself diving into this word again, and my thoughts were transformed into a vision of how this looked. How the multitude gathered on the porch, looking towards the middle section and on to the altar, the place of sacrifice. What was going on within their minds as they witnessed the priests in the middle of the court, weeping for the people as the sacrifices were to be placed upon the altar? It had to be a very surreal and tense scene. From the bleating cries of the sacrifices to the cries of weeping intercession — can you imagine the intensity of the scenario?

The Porch of the Temple was the location that drew the population. It was a place of the people because it would be a location that they could get close enough to see the outer court actions. During this time, only the Priest had limited access to the daily process that would be required to maintain the Temple. Often a multitude would gather to see the interactions of the Temple. And often it would be only a handful of individuals. The Porch was for the people to gather, but not for the Priest to remain at.

The between is a place of Intercession! As the Priest would take their place in between, they would be representing God to the people, and the people to God. It would be the cry of the Priest unto the Lord, to “Spare your People, oh Lord.” This place wouldn’t have the blood stains, but would be saturated with the sounds of weeping for the people, in which the Priests were called to fight for, and not against. The place between would be a worthy location. It wouldn’t always be a place of tears and the cries of prayers. It would be the place of martyrs from the life of Zechariah, who was slain there according to Matt.23:35. And yet, he was not the only one who lost his life there.

THE WORD OF THE LORD

While mediating on these scriptures I heard a clear word from the Lord: “Get off the Porch!”

At first, the simple statement didn’t relate to me with clear understanding, and I had to seek the revelation from the Lord. I heard the Lord again say, “Get off the Porch!” Then He said, “Many of My chosen leaders have settled for a place on the porch. They have sat down among the crowds of applause and popular opinions. They are adored among the multitude while losing sight of their purpose. They have been unwilling to intercede on behalf of the people because of their view. The view from the porch is different than the view from the altar. The view from the altar is different from the porch. This is why I have called upon My leaders to be in the between, so that they never lose sight of the value of the people and the cost of the sacrifice. My chosen leaders among the multitude have exchanged the sacred ground for the affirmation of the porch. I, the Lord, am calling the Priest to take the place of Intercession yet again. The cries of those who will weep again for the people of the nation will be the sound of a victorious people and not a people of approval. I’m calling for those who will say yes to get off the porch.”

After hearing the word from the Lord, I began to understand what He is saying. You see, we live in a generation where many leaders have fixed themselves on the porch where it has become easier to criticize others, rather than intercede. It’s a day where ministries constantly sit on their porches and wage war against those who disagree with their revelations, rather than waging war against the rulers, against the powers, against the world forces of this darkness, against the spiritual forces of wickedness in the heavenly places (Eph 6:12). We are in a day where the porch has become the habitation of dwelling, rather than the gathering of those who are worth interceding for. We have exchanged the cries of intercession for the applause of the popular.

This is a call for those who are leaders, to get off the porch. Our view must change and it must change for the glory of the Lord. We can no longer be willing to sit on the porch to throw stones at each other, instead we must be willing to assemble between the porch and the altar for the intercession of the people. We have to be real here and recognize that we can no longer spend our time looking to one-up the other leaders and/or ministries. We must be willing to surrender our selfish ambitions that we may have the view of our purpose as a leader. I believe that we have been given a divine opportunity to advance the Kingdom in a supernatural way that the leaders before our day could only dream about. And yet, we are striving against one another simply because of how we are perceiving things from a distance. Our view is only going to change when we are willing to change our position.

I challenge us all, no matter what your official title is, or what leadership role you have. I challenge us to get back to the purpose of the call as a leader. Don’t fall victim to remaining on the Porch because of the adoration from the population. Rather allow your adoration to be directed to the Father because of the value you see in others and the cost of the sacrifice that is before you. Let us be willing to rise up in between the Porch and the Altar with the declarations of intercession.