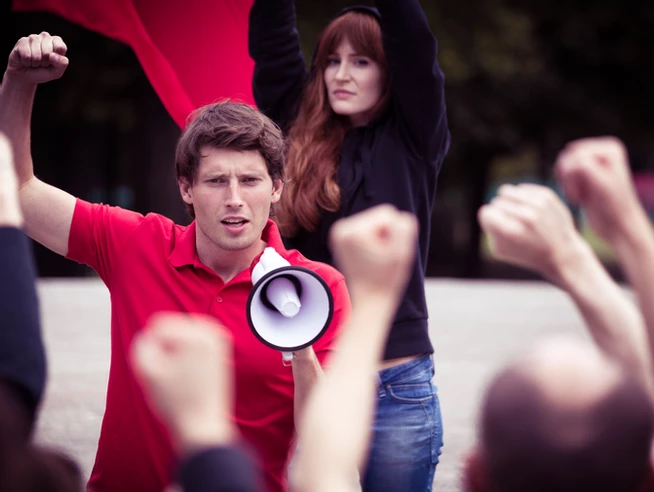 Not long ago I had a dream that I believe that the Lord is permitting to speak to the Body of Christ. The dream initially began with me being in a public place that looked like it would be in a large city (but I do not recall any city specifically). People were gathered in a large crowd that appeared to be like a mob of protesters. I was in the middle of the crowd and my view initially began to pan around the crowd overlooking the people holding up their signs. At this point in the dream I can tell that they have signs, but I am unable to see what is written on the signs. I noticed that the people weren’t yelling in protest, as if they were angry. It came across in a manner that they were cheering loudly in more of a unified chant or yell. In the dream, I was trying to understand what they were saying and it sounded like the crowd was saying UNITE UNITE UNITE, WE ALL MUST UNITE. This went on for a little bit and then I suddenly began to recognize faces in the crowd. I began to see people that I personally know. They were holding the signs and cheering with a declaration. Then the dream shifted and brought a distinct clarity when the signs turned towards me and I saw IGNITE IGNITE IGNITE written on them. I immediately heard the cheer, IGNITE IGNITE IGNITE WE ALL MUST IGNITE. Soon afterwards, I woke up.

There are a few things that stand out to me within the dream.

1. The people I recognized were people that I know who are Born-Again, which causes me to believe that the crowd was actually the Body of Christ.

2. What appeared to be a protest in the beginning was in reality a rally of individuals calling for something specifically.

3. I originally thought the cheer was UNITE which is what we often hear from the Body of Christ…but the dream brought forth with clarity that it was IGNITE.

1a: to put together to form a single unit b: to cause to adhere c: to link by a legal or moral bond

2: to possess (different things, such as qualities) in combination

2: to act in concert

1a: to set afire; also: KINDLE

2: to subject to fire or intense heatespecially : to render luminous by heat

3a: to heat up: EXCITE oppression that ignited the hatred of the people

b: to set in motion: SPARK ignite a debate

I am for the Body of Christ to unite. I do not want to come across as if I am being against the idea or the calling to unite. What I am proposing is whether there could be a reality that we could be wrong (in this current season) to cry out “only” for unity? The fact is, everyone who professes to be in the Body of Christ won’t actually unite. We have fought for generations within the Body of Christ to unite and come together for a greater purpose. Yet, generation after generation it appears that the ability to unite within the Body is next to impossible. Denominations, Eschatology, Independent Churches/Organizations, and more makes this very evident! What if it is bigger than the individual call to unite? What if we are trying to unite, without ever truly and sincerely yearning to Ignite with the Fire of Holy Spirit?

What if there is a call for the Body to IGNITE (in this season) that we have failed to adhere too? In my research of scripture concerning anything that would give me an understanding of ignite, I came to Matthew 3:11-12 (KJV) – “I indeed baptize you with water unto repentance. but he that cometh after me is mightier than I, whose shoes I am not worthy to bear: he shall baptize you with the Holy Ghost, and with fire: Whose fan is in his hand, and he will throughly purge his floor, and gather his wheat into the garner; but he will burn up the chaff with unquenchable fire.”

Did you catch it? Let me share a different translation with you for your consideration. Matthew 3:11-12 (MSG) – “I’m baptizing you here in the river, turning your old life in for a kingdom life. The real action comes next: The main character in this drama—compared to him I’m a mere stagehand—will ignite the kingdom life within you, a fire within you, the Holy Spirit within you, changing you from the inside out. He’s going to clean house—make a clean sweep of your lives. He’ll place everything true in its proper place before God; everything false he’ll put out with the trash to be burned.”

I will admit that typically I am not a huge fan of The Message, but this helps me see a couple of things that stands out to me.

1. Ignite the Kingdom Life within you

3. Everything false he’ll put out with the trash

That is very real and plain talk! Honestly it speaks to me because I sincerely believe that we are in the early stages of a purging within the Body of Christ. This current dream has brought to my remembrance something that the Lord spoke to me early in December 2017. I recognize more and more that the reality of this is occurring in this moment. When I submitted this dream to be tested and judged, one person came back and pointed out how it also connected to Matthew 25:1-13, the virgins were united in being asleep, but when it came to be ignited, only half were ready.

Let me be clear…I am in no way implying, nor criticizing anyone for calling forth the Body of Christ to Unite. That is not my purpose, nor the goal of sharing this dream. What I am emphasizing is that I do believe that the dream is calling for the Body of Christ to rally and prepare to Ignite. The days ahead will continue to reveal those who give the Lord lip service, and those whose hearts sincerely belong to the Lord. Yes, I strongly believe that currently there is a purging, a spiritual cleansing, and judgment within the Body of Christ (1 Peter 4:17 – For it is time for judgment to begin with the household of God; and if it begins with us first, what will be the outcome for those who do not obey the gospel of God?). Repentance will be the cry in the land as weeping fills our altars again. The Fear of The Lord will return to the House of God. I believe that this dream speaks a reality that everyone will not be willing, yet there will be those who will embrace the fire of God (in the reality of a Blacksmith who is willing to put you back into the fire), willing to be those who Ignite. They will Ignite the Kingdom within (through Jesus), the Lord will clean house, as the false is being revealed and trash is being taken out. Let us rally…IGNITE IGNITE IGNITE!