The Dream: A Call to Pray 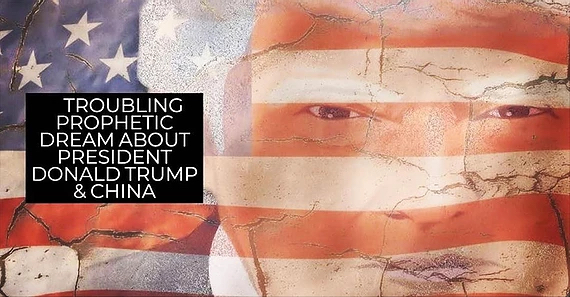 You may have seen the personal video that I did a few months ago, or the interview with Jennifer LeClaire concerning a dream that I had about President Trump, our Nation, and China. It has become clear that the ability to understand what I am saying concerning the dream was difficult for some to comprehend in a video format, therefore I want to share the specifics of the dream in this blog.

I was in Washington D.C. (I lived close to D.C. some years back) in a place that I was very familiar with. I wasn’t too far from the Washington Mall. There were a multitude of people around going about their daily routines. From the ground water began to rise everywhere. It wasn’t a rapidly increasing amount, but a steady rise nonetheless. As the water was rising past ankle deep you could see the people beginning to become concerned with the possible danger. The water continued rising and suddenly there was this ginormous alligator appearing in the water. The alligator was swimming around and the people were beginning to panic more than before. Then the alligator began taking individuals down in an attack. It wasn’t as though the alligator was taking people down quickly or in groups, rather it was one at a time as though the alligator was being specific in certain people. Panic ensued and from the rising water emerged a dragon that was twice the size of the alligator. The dragon immediately began attacking the alligator and this epic battle began to ensue. People were trying to get away from the fight while screams could be heard throughout. The alligator then came to the side of the dragon and that’s when the dragon came at the neck of the alligator. In one bite and snap, the dragon tore the head of the alligator off. At that moment the people began cheering on this dragon. They were cheering the dragon on with excitement in which was like a form of worship. I began to yell at the people to stop cheering the dragon on. But they grew louder in their applause. I was telling the people that this dragon was not a good thing and we needed to stop. In my efforts to get the crowd silent, I woke up.

When I woke up I was immediately shook by the dream. It was a dream like I have never had before. Till this day, I shake with the reality of what this dream is warning us about. I spent weeks in prayer over the interpretation. I then reached out to some individuals seeking their insight and own interpretation of the dream. I would forward the information to many individuals to be sure that I was not interpreting the dream in error. One after another confirmed what the Lord had revealed. I then recorded and document a personal video to make sure that everything would be time stamped so that no one could come back later and try to say that I was manipulating facts. I am going to share exactly what I am implying (through Holy Spirits’ guidance) so that everyone will be crystal clear without confusion. Please allow me to also say that I have no problem with being wrong concerning this dream. I do not have to be right and I am not sharing this to validate myself. I am sharing because I cannot shake the way I feel about the needed call to prayer concerning this dream. If you disagree, that’s your right and you don’t have to feel obligated to anything.

* Rising Water — This is a counter effect to the terminology of “Draining the Swamp”, which could allude to the recent swing in the House of Representatives.

* Alligator — Although many will want to immediately identify this as Leviathan, we must be willing to have an open mind that every alligator does not represent a Leviathan spirit.

* Dragon — Revelations 13 describe a dragon coming out of the sea that is Satan himself, however I ask you to also keep an open mind that the dragon could be the type and shadow of China (Chinese Dragons)

I do not see a dragon (Satan) attacking the alligator (Leviathan) and destroying one of it’s one. Why would Satan destroy Leviathan? He would not. Therefore let’s look at the landscape of the dream. It takes place in Washington D.C. which helps to give a better understanding of what potential could be happening. For the sake of time, let’s say that I am right and the alligator is a type and shadow of President Trump. Although the water is rising, this alligator is still taking out individuals one by one (draining the swamp). Then this dragon appears to take out the alligator and the people are suddenly for the dragon. With the dragon representing China, this could help explain a lot that is happening behind the scenes. To date we know that China has a very troubling relationship with the current administration over tariffs. In many news reports, China’s Emperor has been documented to say that China would flex its muscle economically and with military towards the U.S. if necessary.

On a world stage President Trump is very unpopular. He was elected from the voters of America who are often unaccounted for, and/or rarely considered. However, President Trump is also unpopular with the Hollywood elite and many others who have a public platform. As much as we want to think this Nation loves our current President, there are many who want him removed from office. China is a major powerhouse that is quietly making its mark in the world, and they are doing so with a growing support of socialism. Study for yourself and you will quickly learn that socialism is gaining ground in this Nation. From politicians to actors, directors, and more; socialism is quickly becoming a reality on many political platforms. The year of the dragon will be in 2024…which does not affect President Trump as far as his own Presidential Elections. However, President Trump would be ending his second term (believing he will win a second term) and this would be a critical time in our nation surrounding who would be coming into office after President Trump. If China could manage to bring about some kind of information that would detrimental to President Trump, it could sway the population to embrace a future candidate that has a mandate to change our nation from a Republic to one of Socialism. Now, China could potentially reveal information that could damage President Trump, but they could also make an attempt at his physical life as well.

Let me be clear…I do not want anything to happen to our President. Let me be crystal clear…this dream is not an attempt to criticize nor demean President Trump. Saying that the alligator is a type and shadow of President Trump is not the same thing as thinking that I am implying that he is leviathan. We have to be willing to see is that there are people who do not want the current President to have any success. They need the President to fail for many reasons, and one of those reasons could be influencing our own government and nation. I know that many believe that our current President can have absolutely nothing ever harm him, but reality is that bad things could occur to him and/or any man/woman. I am asking everyone to please consider the possibility that there could be a major threat from China that is working to establish socialism in this nation, and with that could potentially bring harm to our President in the coming years. Please know my heart in saying that I am not attacking our President, but simply asking you to look at the bigger picture of what could be developing over the next 5 years. It is time to PRAY!

To Watch the Interview with Jennifer LeClaire:

Check out these two articles for further info: