The Ships are Coming 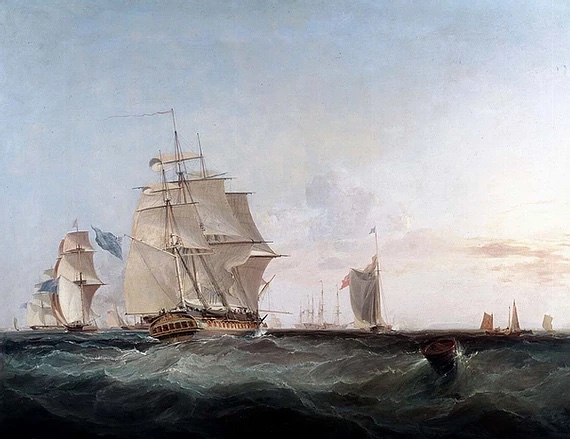 A few weeks ago while working on a demo/reconstruction site for a homeowner I found myself caught up in a vision from the Lord during a time that I was definitely not thinking about what I began to see before me. During a day of demo work I had a moment where I was standing to the side of the room and from no where I had an open vision of the middle of the ocean with a very violent storm raging across the waters. The waves were large and creating a vivid scene. Out of the midst of the storm from the depths of the waters a large and very old ship (This ship reminded me of the images that I have scene over the years with what the pilgrims used to make their way to America), came forth. It was like a scene from a movie was being played before my eyes as this large, historical ship emerged from the depths of the sea. When the ship sat upright there were no sails on the wooden poles which were a part of the ship. The ship began to press through the storm but was unable to make any progress as the waves proved to be too violent. Along with the storm the ship had no sails to pick up the necessary momentum to progress forward.

As the ship worked and worked to make forward progress, it would soon be followed by three other ships coming forth from the depth of the sea. It began with the one, but very quickly there would be a total of four historical ships with no sails, fighting to move forward in a violent storm. When the ships emerged I realized that the storm began to increase and soon though that it was a matter of time before the storm would destroy this old ships. However, these 4 ships began to align in a perfect formation. Instead of fighting through the storm separately they align side by side to a formation that strengthened their ability to progress. Immediately when the ships were aligned there appeared from no where, sails forming to attach themselves in the proper place where they would be effective. When the alignment of the four took place it was then that the sails appeared and the progression began to take place. From the alignment the ships moved forward without any damage from the waves. The storm immediately became ineffective to the ships and the picked up speed more and more. As they pushed forward I recognized the the ships were heading to America. I could see the land from the view of these four ships of heritage moved to the land. Then…the vision was over! Yep, that’s right…that’s all that I saw without much to go on. From that moment I have spent a lot of time in seeking the answers to what the Lord showed me.

I believe that the Lord has shown me a vision of what is coming to this Nation, so let’s break down a few things.

1. These 4 ships were historical in age speaks that there is a “Heritage” attached to their identity

2. Alone the ship was insufficient in its progression

3. Even when the 4 appeared they remained weak as independent operations

4. The “Alignment” brought strength to the 4 against the storm

5. The sails were originally missing, then came to be as a result of the alignment

6. The storm could not stop the ships from advancing to the Nation

A few days after I saw this vision I heard the Lord clearly say, “Out of the midst of the storm there is a remnant that is arising to align and embrace the genuine/authentic wind of Holy Spirit to direct the paths through the turbulent waves. The sails of Awakening/Reformation are being hoisted!”

It’s evident that a storm of chaos has been brewing in the Nation as what was once wrong has become right and what is right is now wrong. For many in this Nation it would seem that there is no hope for America and our opportunity has been closed for an outpouring of God. I suppose that I tend to have a little more hope. You see I believe that the vision is from the Lord and He is saying that there is a movement coming to this Nation in the middle of the storm. It’s coming because of the Alignment from His Heritage. I strongly believe that the 4 historical ships are representing four previous moves of God throughout the history of this Nation. This Nation has a Heritage of the Outpourings of God and it’s because of what He once did before, He is going to release again. The Heritage is going to emerge because of the strength of the Alignment. What is needed, but not yet here (sails) will begin to be restored and made new as the alignment is formed. This outpouring is coming to this Nation and there is nothing that the storm can do to stop it.

It is our responsibility as Sons and Daughters of God to align ourselves with the Prophecy that has yet to be fulfilled in this Nation. We have a heritage that has yet to be aligned and God is not done with this Nation yet. We can continue to fight our own battles through our own storms, or we can choose to align ourselves with others who are willing to press forward for the Glory of the Lord.

In closing, let me add that about a week and half after the vision I had four specific words that came to while in prayer. I knew the words as I am very familiar with them. However, I asked the Lord why these came to my remembrance and He simply said…”these are the names of the ships”.

There is a Revolution coming that is birthing Revival within the Body of Christ, which will establish authentic Awakening, and then Reformation across the Land. I cannot help but be encouraged as I see The Ships are Coming!